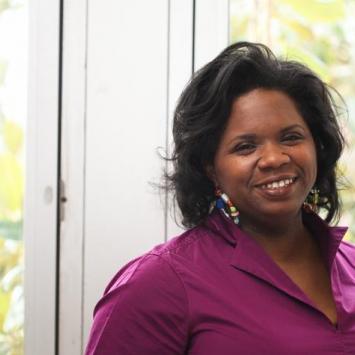 Dr. Melynda Price is the William L. Matthews, Jr. Professor of Law and the John and Joan Gaines Professor of Humanities.  Since 2018, she has been the Director of the UK Gaines Center for the Humanities.

In 2017, she was named University Research Professor, which is awarded by the University of Kentucky to faculty for outstanding research achievements.  From 2012 to 2017, Professor  Price was the Director of the African American and Africana Studies Program in the College of Arts and Sciences. She is an affiliated faculty member in the African American and Africana Studies Program and the Department of Gender and Women’s Studies.

Professor Price is the author of At the Cross: Race, Religion and Citizenship in the Politics of the Death Penalty (Oxford University Press, 2015).  Her work has been published in both peer-reviewed social science and law journal, newspapers and literary journals. In addition to her published research, she is a member of the UNITed in Racial Equity (UNITE)  Research Priority Advisory Board and has served as a panel reviewer for multiple national research foundations.  Professor Price joined the UK College of Law as an Assistant Professor in the fall of 2006 after completing the doctorate degree in Political Science from the University of Michigan. Her dissertation was awarded the 2007 Best Dissertation Award from the Race, Ethnicity and Politics Section of the American Political Science Association. In addition to her degree in political science, she also earned a J.D. from the University of Texas School of Law in 2002. While at the University of Texas, she was a member of the Texas International Law Journal and was awarded both the University of Texas Coop Award for Public Interest Law and the Baron and Budd Scholarship for Public Interest Law. She completed her undergraduate studies in Physics at Prairie View A&M University in 1995.

Professor Price’s research focuses on race, gender and citizenship, the politics of punishment and the role of law in the politics of race and ethnicity in the U.S. and at its borders. In 2008, she was awarded a Ford Foundation Diversity Postdoctoral Fellowship. Her host institution was the Capital Punishment Center at the University of Texas School of Law. She was a 2016-2017 fellow in the Law and Public Affairs Program at Princeton University.