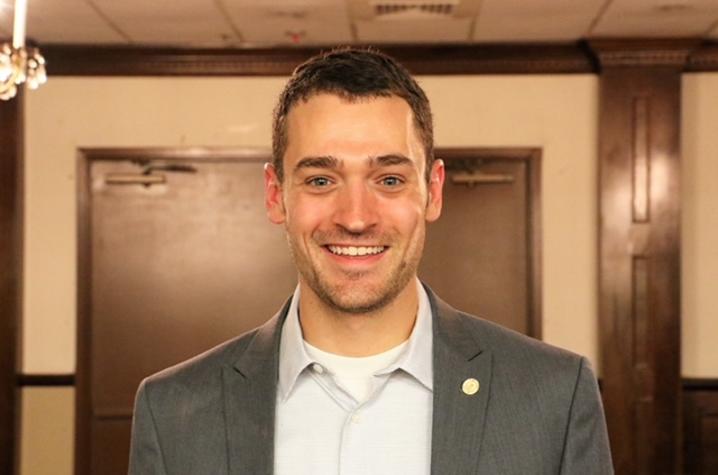 Luke Glaser was once a struggling math student. Academically, he often excelled. But learning polynomials, as well as quadratic equations and functions, just didn’t seem applicable to his life as a high school teenager.

“I hated math, and I took AP classes to simply not have to take math in college.” But 10 years later, in one of life’s little ironies, Glaser finds himself at the head of the classroom teaching AP Calculus.

“The biggest challenge wasn’t going to be re-learning integrals or derivatives, but convincing students that taking the hard classes are worth it.”

As the AP instructor at Hazard High School, Glaser understands his seniors are facing an exhilarating but daunting decision — where to go to college.

The choice is about more than the name of the school etched on your diploma. Where you pursue higher education will touch numerous aspects of your life — from academic studies to social activities and beyond. Many factors go into making that final decision, but for Glaser, the moment he stepped foot on the University of Kentucky campus, he just knew.

“I toured a handful of colleges both in state and out of state. There was an energy at UK that is more felt than described, and I just remember getting a palpable sense of that energy on my tour,” he said. “It’s the flagship university of Kentucky. There were opportunities that I was unlikely to find elsewhere.”

So, Glaser enrolled at the university, moved from his hometown of Louisville to Lexington, and took advantage of every opportunity that came knocking.

“Like many college students, it took me a while to get my feet wet at college. But once I did, it quickly became home,” he said. “I tell my students to get involved with as many things as possible. It may be awkward at first, but opportunities, networks, and friends at college follow a pattern of exponential growth. The more things you do, the more all of these things increase.”

For Glaser, that sentiment held true. With every resume-building opportunity, he also expanded his definition of community. “Most of my mentors at UK I met through my experiences. Giving a speech led to a professor recommending me to work for the Kentucky Kernel. Joining the College of Arts and Sciences Ambassadors led to a job with the College and a great relationship with my adviser, Jamie Wheeler. Interacting with professors outside of class led to friendships with many, including Jonathan Allison, Robert Rabel, and nearly all of my professors in the Gaines Fellowship.”

And throughout his time at UK, those mentors-turned-friends would help point Glaser toward his passion and purpose.

Most of us have no clue what we want to do with our lives — even after we finish school.

Glaser was no exception. During his junior year, he wasn’t quite sure what his future would hold. But looking back, he’s able to pinpoint the exact moment his path became more clear.

As part of the Gaines Center for Humanities Fellowship, Glaser visited Whitesburg. Even though it was his first trip to Eastern Kentucky, he admitted to having preconceived notions about Appalachia and the people who call it home.

“Growing up in Louisville, you knew two things about Eastern Kentucky: One, somewhere past the Red River Gorge everything became black and white, because all the photos from the area were black and white, and two, that’s the place where you go on mission trips to help build homes and schools, because they can’t do it themselves.”

Glaser quickly learned: he was wrong.“There were brilliant people who were living in a beautiful part of the state and working to make it better,” he said. “So, I originally came to Hazard to explore that gap and find the things that we had in common. It has turned into a nearly decade-long experiment.”

In 2013, Glaser graduated from UK with two degrees — one in English and one in Hispanic studies. Today, he continues to use the lessons he learned in the classroom to help his own students.

“My experience with Arts and Sciences gave me the opportunity to tackle this formidable task — to attempt something more important than the math itself: the ability to make people care,” Glaser explained. “The skills I learned as an English major helped me create Calculus Creates Problem Solvers — a curriculum based around why AP classes are worthwhile and what opportunities they can unlock for students.”

And it’s working. Last year, 27 students at Hazard High School passed the AP test — the highest passing number in school history. Additionally, they beat the Kentucky average and the national average score on the AP Calculus exam.“Before students take any test or quiz in my class, I say, ‘Every time you do this you are not just taking an exam. You are pushing back against anyone who has written you off.’”

Glaser utters those words knowing that students in Appalachia have perceptions to overcome. “And I want my students to know that they are just as capable, just as intelligent and just as driven as any other student in any part of the country. So, when we sit for the AP exams, they mean more,” he explained. “Students who receive college credit have a sense of accomplishment and are armed with the tools they will need for college. I’m proud to work with such men and women.”

Glaser is also fighting for the Hazard community outside of the classroom in his role as a city commissioner.

Since his election in 2018, he has been a crucial member of one of the most effective administrations in Hazard history. Glaser has helped to upgrade the area’s water policies to modernize one of the most important issues the city faces, and he created one of the most comprehensive civic internships in the state.

Additionally, Glaser is on the boards of the Appalachia Arts Alliance, InVision Hazard, and Teach for America Appalachia.“I never stop learning, and I remain awestruck by the seemingly endless reservoirs of kindness, generosity, and creative spirit I find in the people I work with,” he said. “I consider myself an adopted son of Appalachia, and I am grateful they are willing to have me.”

Glaser was once a struggling math student, but now, he’s developed his own formula for success. By being a bold leader with a bold vision, he hopes to achieve bold results for Kentucky and beyond.

“I’m driven to continue to explore the chords of human connection that bind the Commonwealth together; to find the things that unite us in an era of seemingly omnipresent division,” Glaser said. “That work and mission will continue to drive me, regardless of future endeavors.”